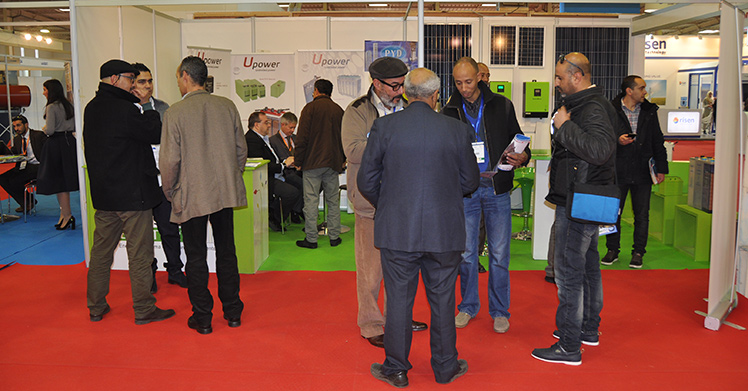 SOLAIRE EXPO MOROCCO 2016 spray its records and confirm it’s position of the first b to b plateform of solar and energy efficiency in Morocco, africa and the mediterranean.

Organized under the high patronage of His Majesty King Mohammed VI, inaugurated by Mr. Lahcen Daoudi, Minister of Higher Education, Scientific Research and Executive Training, 2016’s edition of the International Exhibition of solar energy energy efficiency «SOLAIRE EXPO MOROCCO 2016» have recorded this years 75 exhibitors and 5400 visitors from several countries around the world, including Morocco, Spain, France, Portugal, Italy, Turkey, Tunisia, Australia, South Africa, China, Poland..., confirming its position as the first platform B to B of Solar and energy efficiency in Morocco, Africa and the Mediterranean. Indeed, by its many strengths, SOLAIRE EXPO MOROCCO had a record in the number of visitors recorded during the 3 days.

This 5th edition is also distinguished by the high patronage of His Majesty King Mohammed VI, the support and the granting of the first order institutions, including the Ministry of Energy, Mines, Water and of the Environment, the Ministry of Housing, and Urban Policy and the Ministry of Higher Education, Scientific Research and Executive Training.

In addition to a targeted public, SOLAIRE EXPO MOROCCO 2016 has interested an other operators, businessmen, finance companies, banks... This diversified presence allowed to the show to well complete it’s mission of showcase of all fields of solar energy and energy efficiency in Morocco. During 3 days, these operators were able to exchange, share and highlight in an appropriate setting their know-how, methods, technology solutions and innovations...